As always, this week I chose to spend a really really long time doing my 2D animation homework, at the expense of all my other classes (just kidding, any teachers that might be reading this).

Traditional Animation + Photoshop + Flash + After Effects = My ever increasing need to sleep.


Long Technical Rant: Going into this assignment, I wanted to focus less on the animation (sorry Scott - most of it's on 3s and 4s) so I could spend my time figuring out the insanity that is After Effects. I animated everything traditionally (note to self, ColorErase doesn't scan in nicely), scanned it all in, batch processed it in Photoshop to get it on cels, and then timed it all out in After Effects. From there, I switched all my layers to 3D mode (:O), and separated out my ground planes to different depths. After that, I could move my 3D camera around, and the animation would show convincing parallax (things in front move more than things in back). The only downside is that shit takes FOREVER to render with a 3D camera. Creds for this go to the magical Tahnee Gehm. 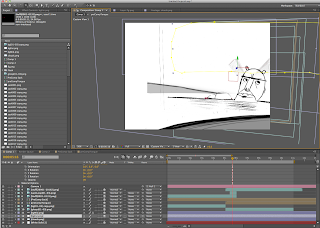 I fear this program.
But less now.

At this point, I realized I had forgotten to animate the trailing ears and feet on the sack - so this also became a test of integrating flash and traditional animation.  I don't think it looks particularly great, but at least I know how to do it now - and it's something that might appear in my film.


Overall, even though this all took a stupid amount of time (mostly because I'm so new to it), I feel just that much more prepared to do some crazy stuff when film season comes around second semester. Space Babe, watch out.
Made by Michael Piazza at about 9:41 PM